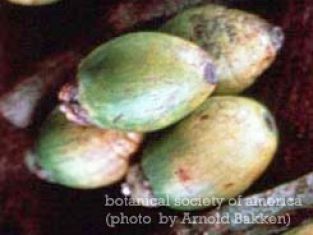 I was last in Taiwan in 2000, and noticed brightly lit booths, each containing with a young woman on a stool. I asked someone what they were, and they said they were selling betel nuts, a mild stimulant similar in use to chewing tobacco.

When I went to high school in Taiwan back in the 80s, I knew betel nuts to be the source of red spittle all over the sidewalk. Taxi drivers would chew them as they waited for fares. They were sold from dingy stands on street corners, with a bunch of betel nuts hung above it as signage. A marketing innovation had clearly taken hold since I’d been away, apparently unique to Taiwan.

My interest was rekindled by the recent flurry of Betel Nut Girl postings at BoingBoing, with today’s followup poking a little deeper into the mystique:

Anon sez: “I was asking about Betelnut girls to friend of mine from Taiwan and she was saying documenting these girls is a popular subject for artists and art students in Taiwan.

On the other hand, eslisland.com notes:

[…] after harrassing and arresting girls for indecent exposure or even prostitution, lawmakers have had their hands tied by the powerful farm lobby of betel nut growers (& chewers…) who have thus far made sure that no lawmaker outlaw the practice entirely.

So it seems that it’s not entirely harmless fun. There are more pictures on eslisland.com, but they’re sleezy. Don’t look! :-) Lots of other links at the end of the article regarding the social-political impact of the Betel Nut in Taiwan.