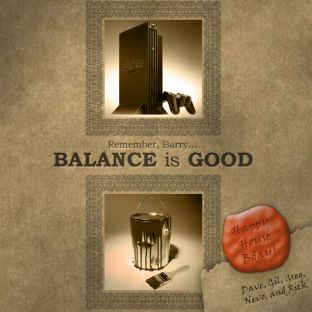 Was just browsing my archives, and came across this image I made for my friend Barry’s birthday party. Barry had just moved into his house and was consumed by painting. We thought it might be a good idea that he had something to distract him. Because we’re evil.

This is a good example of some clip art scrounging + shameless use of built-in Photoshop layer effects. This follows some good advice from former CGD mentor Bill Colgrove, who taught me that clip art was not to be despised for its humble ready-to-wear origins, but to be used well.

The wax, unconvincing as it is, is all Photoshop effects, so it was easy to change the shape. The better way to do it would have been to render it in a 3D program that supported subsurface light scattering, but I am several versions behind on my 3DS Max license. Anyway, the result is a slightly cheesy rendering that reminds me of multimedia from the 90s, but Barry is also slightly cheesy :-)