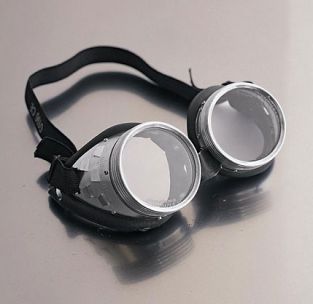 When I first saw these goggles, I immediately felt the urge of become a properly-accessorized mad scientist. With these goggles, surely I could rule the world! But I was with friends and was self-conscious about admitting this publically. So I passed them up.

That was a big mistake. Re-introduced to them by my sister (who’s so much cooler than I), I was again consumed with consumer desire, only to find that they’re sold out online and at every store we’ve tried. My sister suggested that the harry potter quidditch goggles might be OK, but both she and I knew that they were a poor substitute for fine german engineering (I may be assuming too much here…they’re probably all made in the same factory in China). The store people say there will be more goggles in December in time for Christmas, but I wanted them for Halloween! And right away! Now!